(Fort McMurray, AB) Girls Inc. of Northern Alberta and Syncrude are proud to announce Christine Burton as the seventh nominee for the Women of Inspiration series. 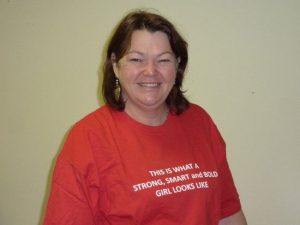 Christine has lived in the Wood Buffalo region for seventeen years. She is married to realtor Julio Florez, is a proud mom to her two teenage children, Ben and Katrina, and is an active volunteer and community leader.

Christine has a BA (Hons) from the University of Toronto and a law degree from Osgoode Hall. She has used her education to aid in both international and local community development. She has worked with Aboriginal communities in the N.W.T and the Wood Buffalo region, and with other non-profit organizations across Canada. Christine has a wealth of knowledge about the political process in Canada and abroad. After Law School she worked for the United Nations in Cambodia and South Africa – teaching human and civil rights, and setting up democratic elections.

Christine has enjoyed a very rewarding career, working as Crown Prosecutor, a political assistant to the Ontario Attorney General, an international election expert, and a lawyer and manager for stakeholder relations and Aboriginal affairs.

Christine moved to Fort McMurray in 1995 and was soon after called to the Alberta bar. She practiced law for a few years before taking on a position as Manager of Stakeholder Relations with Suncor Energy. Christine worked for Suncor for almost 10 years where she further developed her expertise in consultation, issues management, risk communications, multi-stakeholder processes, Aboriginal affairs and community investment and development. In her role, Christine worked on a wide range of regional issues and was a frequent speaker at conferences and workshops across North America. When Christine left Suncor she set up her own consulting legal practice.

In addition to her accomplished career, Christine also takes time to give back to the community by sitting on many Non-profit Boards in the Wood Buffalo region. She currently chairs the Boards for the HUB Family Resource Centre and the Wood Buffalo Wellness Society. She also sits as a founding director on the Wood Buffalo Artists Forum. Christine leads the Penhorwood Condo Association – a task she took on after 7 condo buildings were evacuated permanently in May 2011. In 2010 Christine was the recipient of the Heart of Wood Buffalo award for non-profit governance.

Christine is actively involved in issues affecting new immigrants, refugees and foreign workers. In 2007 she set up a free monthly notary public clinic in partnership with the YMCA Immigrant Settlement office.

As an artist herself, Christine is passionate about the arts in the Wood Buffalo Region and works hard to support the visual artists especially. Christine helped set up the MacDonald Island Community Art Gallery, and is currently working on setting up a regional Arts Council which will help to further develop arts and culture in the region.

From her remarkable career, to her non-profit involvement, to her volunteer work, Christine is truly a shining example of a Woman of Inspiration.

If you’d like to nominate a woman who has been an inspiration to you or someone you know in the Regional Municipality of Wood Buffalo, Click here for a WOI inspiration Form.