(Fort McMurray) Girls Inc. of Northern Alberta and Syncrude are proud to announce the 11th nominee for the Women of Inspiration series 2013-2014:

Originally from Pakistan, Farah Ahmad, Registered Nurse with Alberta Health Services, has called Fort McMurray home for over ten years. She managed to complete all her education while employed full-time and while raising a family and now holds a Masters in Nursing. After working in many different areas of nursing and in many different cities in Canada, she moved to the north to provide nursing services to both the patients and the medical community at large. 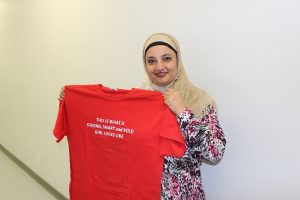 In the ten years Farah has lived in Fort McMurray, Farah has volunteered countless hours for the Canadian Diabetes Association, Heart and Stroke Foundation, Breast Cancer Foundation and Cancer Society of Fort McMurray. She has also organized many health expositions offering her expertise in the area of diabetes, women’s health, cancer, breast cancer and prevention. In 2012 she was recognized nationally by receiving “Diabetes Educator of the Year Award” from Canadian Diabetes Association, and in 2013 she received yet another award for her professionalism in Diabetes. Farah is a pioneering member of the Wood Buffalo Primary Care Network, the first of 44 open in Alberta, and she has played an integral role in designing the clinic and developing the chronic disease programming. Today, she is the lead of the diabetic prevention clinic, gestational diabetes and pediatric diabetes program, as well as the insulin pump program.

Farah’s contributions and commitments span beyond Alberta Health Services. She regularly mentors nursing students from Keyano College, gives presentations to the aboriginal communities, and is a Regional Chair for the Northern region for Canadian Diabetes Association. With a team of local health professionals, Farah has also volunteered her diabetes expertise to aid in prevention of diabetes, and also uses her knowledge to present the prevention of other diseases for Suncor, YMCA, and many other organizations. She has also dedicated over 10 years of her career to the Aboriginal communities in the Regional Municipality of Wood Buffalo and surrounding areas.

Although Farah’s professional involvement is extensive, her life extends beyond the professional. She epitomizes a balanced lifestyle, and is an active member of the Canadian Diabetes Association, where she advocates for all living with diabetes. Two years ago she was instrumental in lobbying for insulin pumps to be covered for all Type 1 Albertans, resulting in that vision coming to life in June 2013, and now all Albertans living with Type 1 diabetes can receive an insulin pump. She often volunteers countless hours answering calls, doing home visits, and last year she took her own personal time to escort four boys to attend a diabetes camp in Calgary, which otherwise would not have been possible. What truly distinguishes Farah is her calm, warm and pleasant presence. In this transient community, there are many people that come and go, and Farah is eager to help new staff members. She is a true leader in that she leads by example, and she is a woman of action instead of reaction. If there is a situation, she strives to solve it.

Farah’s mantra is “Believe in yourself; that is the most important thing. If you believe, anything is
possible.” Having overcome the struggles of being a woman of minority and succeeding in her dreams by believing in herself, Farah has become an inspiration to countless women and girls in Fort McMurray.

Girls Inc. of Northern Alberta and Syncrude will honour Farah and 11 other nominees, at the Women of Inspiration Celebration which will take place June 14th, 2014 at the Sawridge Hotel.