(Fort McMurray) Girls Inc. of Northern Alberta and Syncrude are proud to announce the 1st nominee for the Women of Inspiration series 2014-2015:

Cheryl Golosky was born and raised in Fort McMurray, where she graduated from Father Mercredi High School and then earned her Business Diploma from Keyano College. She worked in the finance occupation for a while, but in 1991, Cheryl decided to make a drastic career change and returned to College to study at the Emergency Medical Technician program at Portage College in Lac La Biche. Once complete, Cheryl applied with the Fort McMurray Fire Department and became the first female EMT-A/Firefighter within the RMWB. 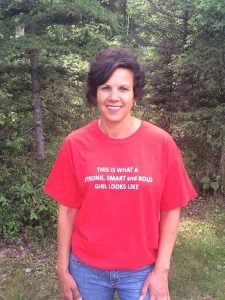 As the only female working in a male dominated field, there were definitely some challenges; however, her commitment and passion for the job soon earned her the respect of her peers. Cheryl has paved the way for women in the field, and the fire department now has 12 women employed on the front line.

Cheryl married early in her career and had three children. Having a career and family created a different set of challenges. If those challenges were not enough, life decided to throw Cheryl a curve ball, and in 1996 she was diagnosed with breast cancer. She had surgery and radiation, making a full recovery, and returned to work to balance career and family once again.

But, in 2002, the cancer returned for a second time. Cheryl was told on a Thursday, had surgery the following Tuesday, and when Cheryl was released from the hospital on Friday, she showed up for work on Monday to write her Fire Lieutenants promotional exam. When her co- workers asked what she was doing there, she replied: “I beat cancer once, and I will beat it again!” Cheryl knew that she had worked too hard to be passed over by someone else for this promotion, specifically a man.

Cheryl was successful in getting the promotion, but not before taking time off for treatment. It was at that time that 45 associates shaved their heads in support of her plight. Cheryl finished her treatment, and returned to work as a ranking officer. She received another promotion a few years later to Fire Captain; an accomplishment that Cheryl is very proud of.

In 2008, the cancer returned again. It had metastasized to her right lung and her spine. Cheryl was told that she had Stage 4 non-curable cancer and that she should get her affairs in order. After seventeen years with the fire department, Cheryl took a medical retirement to be with her family and pursue treatment. She did two years of conventional and experimental chemotherapy, but her quality of life was very poor and her time was spent managing the side effects of many drugs. About one and a half years into treatment Cheryl decided that if she was going to live much longer with this disease, she would live with it on her own terms.

Cheryl fumbled with a plan of action, and took to daily prayer and meditation. She even joined a relaxation yoga class once a week. She met with a Naturopathic Physician who put her on a path of clean nutrition, supplements, and exercise. Within six months, Cheryl was able to stop chemotherapy.

Amidst all of this, Cheryl developed a strong community connection through her volunteerism and has volunteered for Big Brother/Big Sisters, Crisis Hotline, Meals on Wheels, and has been involved in the “Relay for Life” since its inception. Cheryl also has a strong passion for the work she does with the Canadian Cancer Society’s Cancer Connection Program.

Cheryl is very grateful for the love and support of family, friends, neighbors, the Fire Department, her medical team, and this community, and is happy to say the she is living with cancer “on her own terms.” We are very grateful for strong, smart and bold women like Cheryl who are truly inspirational.