(Fort McMurray) Girls Inc. of Northern Alberta and Syncrude are proud to announce the 7th nominee for the Women of Inspiration series 2014-2015:

Christina Traverse, born and raised in Fort McMurray, is an inspiration in so many ways, with her greatest quality being perseverance. 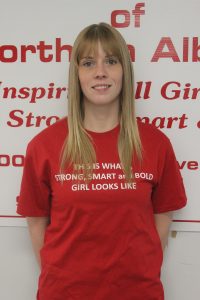 Christina has always had the dream to run a team of dogs. As a young girl, she used to hook up her younger brother to a sled and make him run. Once she got her childhood dog, a German shepherd by the name of Cheyenne, she figured out how to hook her up and go for a run.

Christina began running dogs in 2008, started racing in 2011, and in the winter of 2013 Christina represented Fort McMurray as a Dog Musher (Mush McMurray) in the Yukon Quest. The Yukon Quest is a 1,000 mile international dog sled race between the Yukon and Alaska that takes place during the coldest time of the year. Participants eat and sleep outside during this race (for up to 20 days). This is considered the most difficult dog sled race in the entire world. Christina faced a lot of adversity during this race including sexist behavior from the other racers. She also fell extremely ill during the race and had to drop out early. Despite all of this she plans to return and try again in 2015.

Christina is an amazing advocate for animals. She has over 33 dogs (including her sled dogs), a cat named Pumba, a Chihuahua named Peanut, a horse, and her best friend/dog Flick. She has served on the board of directors at the Fort McMurray SPCA for two years and is still an active member, and spends all of her time at the dog lot bringing ice for her dogs in the summer, hay for them in the winter, and just generally taking exceptional care of her animals. Flick joins her everywhere she goes.

Christina is also the president of the board of directors of the Justin Slade Youth Foundation. Justin Slade was Christina’s cousin who lost his life following a tragic accident on highway 63, so she is extremely passionate about the foundation. JSYF targets youth between the ages of 12-18 and their mission is to empower young people to make better life choices and to express themselves in positive ways through music, drama, art and sports. The foundation organizes many exciting events for local youth, including camping trips, laser tag, Unity Day and more.

To pay the bills, Christina works as a local realtor at Sutton Group in her “spare time,” as she refers to it. She is such a busy young woman; it’s a wonder if she has any time at all to rest!

Christina is an inspiration for girls to become involved in sports, even if they are male dominated, because she is willing to participate in something even when it is hard and because even when she fails, she is willing to try again. Christina has shown that she is strong, smart AND bold.

Girls Inc. of Northern Alberta and Syncrude will honour Christina and 11 other nominees, at the Women of Inspiration Celebration which will take place in June 2015 at the Sawridge Hotel.