(Fort McMurray, AB) Girls Inc. of Northern Alberta and Syncrude are proud to announce Angela Adams as the eighth nominee for the Women of Inspiration series.

Angela Waniandy Adams was born and raised in Fort McMurray. Coming from humble beginnings, Angela was one of the youngest children of a Métis family that helped to establish Fort McMurray. As a young, single mother, Angela was determined to improve her life, and the life of her child. Through her own personal strength, focus and determination, Angela has become a role model to girls and women in the Wood Buffalo region. 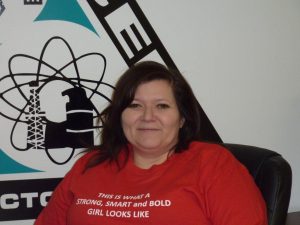 As an Aboriginal woman, Angela has overcome both race and gender barriers to get to where she is today. She has been working for over 20 years as a trained shovel operator at Suncor site, a typically male dominated workforce, where she has excelled.

Angela is very active in her Union – the Communications Energy and Paperworkers Union, Local 707. She has held many Union positions throughout her Suncor career, and for the past seven years has been the Secretary Treasurer/Grievance Chairperson. She was elected by her fellow members, and she is the first women to hold this position in her Local’s history. Over the years Angela has implemented positive and meaningful change.

As past Chairperson of the CEP Local 707 Women’s Committee, Angela worked closely with the Fort McMurray Family Crisis Society, and lent her support to various other non-profit organizations within the community.

Angela has been a Public School Board Trustee for many years now. In this position she has had the opportunity to help instill gender equality within the local school system, fostering a better environment for our girls and young women. She has also been a delegate to the Fort McMurray District Labour Council, working with a variety of unions throughout the community.

Angela is a proud supporter of the Wood Buffalo region who leads by example; she drives positive change for other women and girls by guiding, supporting and encouraging them. Angela really does embody the Girls Inc. mantra of ‘Strong, Smart and Bold’.