(Fort McMurray, AB) Girls Inc. of Northern Alberta and Syncrude are proud to announce their second nominee for the Women of Inspiration series.

Since 1980, Lorriane Demers has been educating students in the Wood Buffalo region through the Fort McMurray Public School District. She has worked as a teacher in the primary, elementary and junior high school grades; and has also worked as a music specialist, guided children as a school counsellor, and as a principal. She also took on the role of Partnership Facilitator, where she broke new ground in helping KAOS radio make a new home inside the Composite High School. 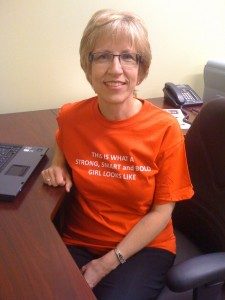 This partnership has allowed students of the school to have exposure to media training and expertise; a concept that was recognized by the Alberta School Boards Association. She also worked to develop a formal partnership between the Public School District and the Fort McMurray Food Bank; as well as the Edge School Skills Academy, which will help to create cutting edge athletes right here in Wood Buffalo.

Demers has also been a major advocate for celebrating aboriginal culture and heritage in schools, and greatly contributed to the Fort McMurray Public School District’s very successful First Nations Metis and Inuit (FMNI) programming. She was also the only female to become principal of the Islamic School in Wood Buffalo.

Her passion for youth, culture and education doesn’t stop at the Public School District, either. Demers has served on the board for the United Way of Fort McMurray, Stepping Stones Youth Home, and Keyano College to name just a few. She has also been handed the Alberta Teacher’s Association Special Education Administrator’s Award in 2003, the 2004 Provincial Special Education Award, and the 2005 Alberta’s Centennial Volunteer Recognition Award for her efforts.

Girls Inc. would also like to announce that the deadline for nominations has been extended to January 31st, 2013 in order to allow for more nominations to come in.

If you’d like to nominate a woman who has been an inspiration to you or someone you know in the Regional Municipality of Wood Buffalo, please go to our website www.girlsincofnorthernalberta.org under the events tab for a nomination form.