(Fort McMurray) Girls Inc. of Northern Alberta and Syncrude are proud to announce the 9th nominee for the Women of Inspiration series 2014-2015:

Diane Shannon moved to Fort McMurray from Edmonton six years ago, and has been a tireless advocate of Fort McMurray by embracing the community, celebrating its opportunities, and working to alleviate its challenges – especially when it comes to the social profit sector. Diane has been at the helm of the United Way of Fort McMurray for the last six years, and her leadership is based on a model of camaraderie, team-work, understanding, and above all empowerment. 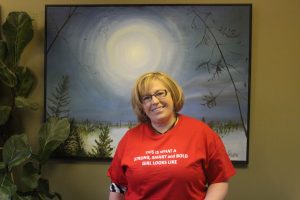 Going above and beyond what is required is central to Diane’s personal and professional ethic. She’s always modeled the importance of being of service to others. Strong, smart, and bold describes Diane as she tirelessly researches and monitors community needs to ensure United Way meets its strategic objectives for resource investments into 70 programs and partnerships in three priority areas that help move people from poverty to realizing possibility, strengthens community and supports kids to become all they can be.

Diane recently led the effort that saw the United Way of Fort McMurray become one of only 82 charitable and non-profit organizations across Canada that received accreditation under Imagine Canada Standards program. She also leads the Homelessness Initiative Strategic Committee (HISC) and has helped change the way our region works across organizations and sectors to tackle the issues around homelessness.

Diane’s tireless efforts to sustain our social profits have been acknowledged nationally with a Queen Elizabeth II Diamond Jubilee Medal. Alberta Venture named her one of the Top 50 Most Influential Albertans in 2011, and the same honour came from YMM magazine, when she made the Local Influencers of 2013 list. This summer she was honoured by Xi Alpha Xi, a chapter of the Beta Sigma Phi Sorority, as City Woman of the Year as well as for her leadership of the United Way, her work on homelessness, and for all that she does for Wood Buffalo. She also received the Community Service Award from the Fort McMurray African Association.

Inspiration is a call to action. It is the feeling of empowerment, confidence, and trusting that you can be better than who you are – Diane invokes all of this in everyone she comes across – girls and women alike. She personifies what strong, smart, bold women entail.

Girls Inc. of Northern Alberta and Syncrude will honour Diane and 11 other nominees, at the Women of Inspiration Celebration which will take place June 13th, 2015 at the Sawridge Hotel.