(Fort McMurray, AB)  Girls Inc. of Northern Alberta and Syncrude are proud to announce the fourth nominee for the Women of Inspiration series.

Barbara Ann Jewers is a woman who really needs no introduction. She’s lived in Wood Buffalo for a number of years, and started with Syncrude 22 years ago. Today, she’s the Manager of Lease Development and Closure, and is truly a leader in her workplace and in the community. 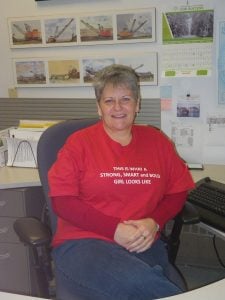 The notion of volunteering started early for Jewers; she started out lending a hand to others with her Grandmother in her hometown in Nova Scotia as a young girl. Two University degrees and an MBA later, she moved to Fort McMurray and started with Syncrude. It was then she began volunteering in small roles with the Syncrude United Way Campaign and over the years, her dedication to the cause has grown enormously. She is currently the President of the United Way of Fort McMurray Board of Directors.

Jewers is also the President of the Beta Sigma Phi sorority, which is an international social, cultural and service organization for women; and has volunteered her time with organizations like the Fort McMurray Food Bank, The Canadian Cancer Society, the Fort McMurray SPCA, and Unity House.

But her commitment to volunteerism doesn’t stop there. In 2007, Jewers traveled to Los Angeles to participate in a work project for Habitat for Humanity, working alongside volunteers from all over the world. In 2008, she took on a second project in New Orleans for Habitat for Humanity, to help those affected by Hurricane Katrina. She hopes to do a third project in Haiti soon.

It’s easy to tell that Jewers has a passion for community service and giving, and is leading the way for other women to create positive change within the Regional Municipality of Wood Buffalo.

Girls Inc. of Northern Alberta and Syncrude will honour Jewers and eleven other nominees at the Women of Inspiration Gala which will take place in May 2013.