(Fort McMurray) Girls Inc. of Northern Alberta and Syncrude are proud to announce the 7th nominee for the Women of Inspiration series 2015-2016:

Melody Lepine was born in Fort McMurray and grew up in the community of Fort Chipewyan, which is the oldest settlement in Alberta. As a member of the Mikisew Cree First Nation, she learned at an early age to love the land and formed a strong connection to the land through the teachings of her mushum and kokum (grandfather and grandmother) Ms. Lepine balances these teachings in her life every day. Melody went to the University of Alberta and obtained her Bachelor of Science –focusing on environmental sciences and reclamation.  Her balance in teachings of both traditional knowledge and western science is one of her key strengths. As a single mother, Melody realized the need to continue her education and to be a positive role model for her daughter born in 1994. 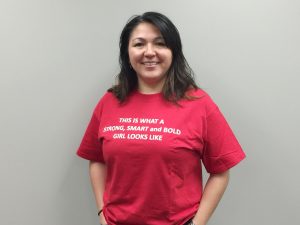 Melody was recruited out of University and went to work for the Mikisew Cree band as their environmental coordinator. She quickly became the Director. She along with her team is mandated to manage all consultation matters pertaining to natural resource development within the Mikisew Cree’s traditional territory and the Athabasca Oil sands region. She oversees and manages many complex and challenging environmental, social and cultural issues that the Mikisew Cree are inundated with. Some of the issues that she manages include oil sands regulatory interventions, developing and implementing the Mikisew Cree consultation protocol, Indigenous knowledge studies, land use planning, government policy reviews, community based research and creating a community based environmental monitoring program.

Melody is a strong supporter of her staff and has been a great role model and mentor for many young indigenous women who have worked with and for her. One worker credits Melody’s encouragement in being instrumental in her own decision to go back to University. Melody’s success as a single mom and her success in going to University as a single mom is an example of what can be accomplished with determination and hard work. Melody believes in providing opportunities for others to achieve their potential.

Melody has been recognized for her many accomplishments  by being awarded an Esquao Award in 2010 and as being awarded the female citizen of the Year award At the Regional Aboriginal Recognition Awards in 2007. She is currently a Board member for CEMA and serves on the TEK working group.

Ms. Lepine in 2012 decided to go back to University for her Masters and knows that she can balance her life with her career with university studies. She is currently enrolled at Royal Roads working towards her Masters. She and her daughter who is also attending university share her interest in continuing education. In 2015 Melody put her studies on hold to run as the New Democratic candidate for the Cold Lake/ Fort McMurray federal riding. Melody has a drive to make the region a healthy and positive place for people to live and work and raise their families.

When she is not working for her community, encouraging others to explore opportunities and take on challenges, she and her husband (she married in 2014) like to mountain climb. They have climbed Mt. Elburs, the highest peak on European continent as well as Mt. Aconcagua – the highest peak in South America. Her future goal involves conquering Mt. Kilimanjaro.

Whether it be climbing mountains, being a role model, working to protect the land for future generations, Ms. Lepine is a role model for all young women and is an excellent example of a Woman of inspiration.

Girls Inc. of Northern Alberta and Syncrude will honour Melody and 11 other nominees, at the Women of Inspiration Celebration which will take place in June, 2016