(Fort McMurray, AB) Girls Inc. of Northern Alberta and Syncrude are proud to announce Daron Van Lingen as the sixth nominee for the Women of Inspiration series. Although Daron is relatively new to the Wood Buffalo region, her contributions to the community are vast. 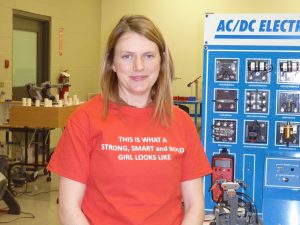 Daron completed her science degree at the University of Guelph and is currently in the fourth year of her teaching career. She first joined the Fort McMurray Catholic School District (FMCSD) as a teacher at St. Gabriel School, and is now the Engineering and Robotics teacher at Father Patrick Mercredi Community High School.

It was at St. Gabriel’s where Daron first began to show her exceptional leadership abilities. She went well beyond the expectations of her job description and took on extra responsibilities, such as organizing student assemblies and the school’s science fair, coaching sports, and even coaching the girl’s rugby team at Father Mercredi – an incredible time commitment. Daron brought energy and enthusiasm to each task she took on, and quickly became a leader at St. Gabriel’s.

In 2011 Daron moved on to Father Mercredi. She moved into the schools brand new Science and Technology Centre and took on the challenge by completing training courses in Kentucky, USA. Daron was not only the youngest person to complete the training in Kentucky, but she was also the only woman.

Daron selflessly takes on new responsibilities. She is involved in the Wood Buffalo Regional Science Fair, and this year is taking over the role of President. Her dedication to her students, and her passion for learning, cause her to go above and beyond and give so much of her time to the community.

Notwithstanding her extracurricular involvement and community work, Daron is also an exceptional teacher and a lifelong learner. In her first year of teaching she was the district nominee for the Edwin Parr award; an award given to the highest achieving first year teacher in Alberta. Daron continues to further her own education by taking numerous courses to help her students in the technologies, and working with the FMCSD’s Professional Learning Communities. She has also won the APEGGA Award for science and math teachers.

Daron’s tireless enthusiasm for everything she gets involved with is infectious, positively impacting both her students and her colleagues alike. Daron has become an exceptional role model for females, especially to those interested in the traditionally male dominated technology industry. Daron will not let things fail, and she works a tireless amount of hours to ensure that her students have every advantage.

If you’d like to nominate a woman who has been an inspiration to you or someone you know in the Regional Municipality of Wood Buffalo, Click here for a WOI inspiration Form.